It was family night at McCabe’s on Sunday. Joachim Cooder sat center stage at the Santa Monica landmark amid an arsenal of electro-acoustic tuned percussion devices and various wired effects gadgets. To his left, seated behind a keyboard console, was Juliette Commagere, to whom he is married. With her — well, in her — was their gestating son, about six weeks from his ETA, and given the name (for now, at least) “Snack Pack” by their two-and-a-half-year-old daughter, Joachim informed us. Juliette’s brother, singer-songwriter Robert Francis, had opened the show with a solo set of tales both tender and tough, full of musings both mirthful and melancholy.

Oh, and to Joachim’s right, making his concert debut, was a bass player named Ry Cooder, Joachim’s dad. That is, his debut as a bass player. He is, of course, one of the premiere guitarists in a vast range of styles, a treasure of the strings and a living, breathing music library. But he’d never played bass in public before and it presented a challenge — one note at a time, he quipped, so “it had better be right.”

All of these clan members had played with each other for ages in various settings. Joachim has been a key figure on many of his dad’s recordings, including some with the Cuban musicians of the Buena Vista All Stars, and Joachim and Juliette having had a series of bands together over the last couple of decades, some of them also featuring brother Robert. Saxophonist Sam Gendel, to Juliette’s left this night, was the only one playing who was not a blood and/or marriage relative to anyone else involved on the bill.

So maybe it was no surprise that the songs showcased by Joachim and crew were largely marked by a sense of familial domesticity. In a conversational voice and a stream-of-consciousness manner — a friend afterwards related it to Mose Allison’s patter-poetry style, though maybe with a hippie flow rather than Mose’s bebop Beatnik clip — he sang of idyllic bliss and lovingly amusing home-life. “Calm My Mind” celebrated supportive coupledom. “Gaviota Drive” wistfully recalled early mornings in the seaside home of Commager’s grandmother as he held then-baby daughter Paloma, just the two of them and the sounds of waves lapping the shore. “Elevated Boy” riffed sweetly on something Paloma came up with regarding a mouse doll of hers. And “Fuchsia Machu Picchu,” the title song from Joachim’s new EP, is an ode to the first bit of flora they planted in the yard after moving in to their Highland Park home. When Commagere joined in on harmonies it was truly, well, harmonious. In multiple senses.

But if he was singing hyper-locally, he was playing expansive-globally. Let’s call the predominant style electro-Congo-Bali blues. At the center of this sonic universe was an electric mbira, a thistle of chiming tines custom-made by San Diego’s Array Instruments. For most of the songs, Cooder started by creating a looped pattern from this, kind of an instant one-man celestial gamelan, sometimes richened with the deeper, earthier tones coaxed from another Array invention, their “organ,” an architecturally arranged forrest of thick nails, each precisely set to produce a specific note in a gorgeously melodious scale.

To this, Cooder père added steady yet fluid bass patterns (the notes were, in fact, right), while Cooder fils and Commager filled some of the rhythms with various hand percussion items. And over it, Gendel blew breathy, understated sax lines, often running his instrument through a tone-splitter to create sort-of animal choruses, clearly evoking the work of inventive trumpeter Jon Hassell, whose ‘70s and ‘80s “Fourth World” music collaborations with Brian Eno seemed to be the primary touchstone for Joachim’s sound-world here. (Hassell guested on Joachim’s 2012 electronics-centric “Love Is a Real Train” album.) 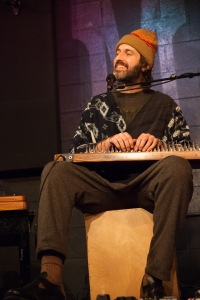 Even the closing song, a version of influential Appalachian banjo/folk song master Dock Boggs’ “Country Blues,” first recorded by the Virginian a full 90 years ago, gained vibrance from this approach, though the downcast desolation and despair of the song’s narrator made for a stark contrast to the rest of Cooder’s set. Maybe it’s a way for Cooder to remind himself of how good he’s got it. Or maybe it’s just a great song for a family music night, which is plenty good enough. 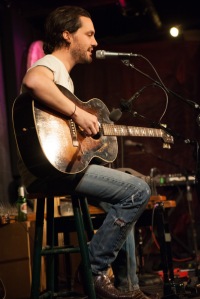 A little coda: Another member of the extended Cooder family was on the minds of many Sunday, as soul single Terry Evans, who had been a core member of many of Ry Cooder’s bands and recordings since the mid-‘70s, passed away at age 80 earlier that day. Evans had recently taken part on sessions for Francis’ new “Indian Summer” album, and Francis paid tribute, dedicating both his opening and closing songs to the singer.

Only a few years ago, Evans did a concert on this same McCabe’s stage, his combination of sweetness and power as strong as ever — as seen and heard here in this song, video made by Wayne Griffith and Sam Epstein: