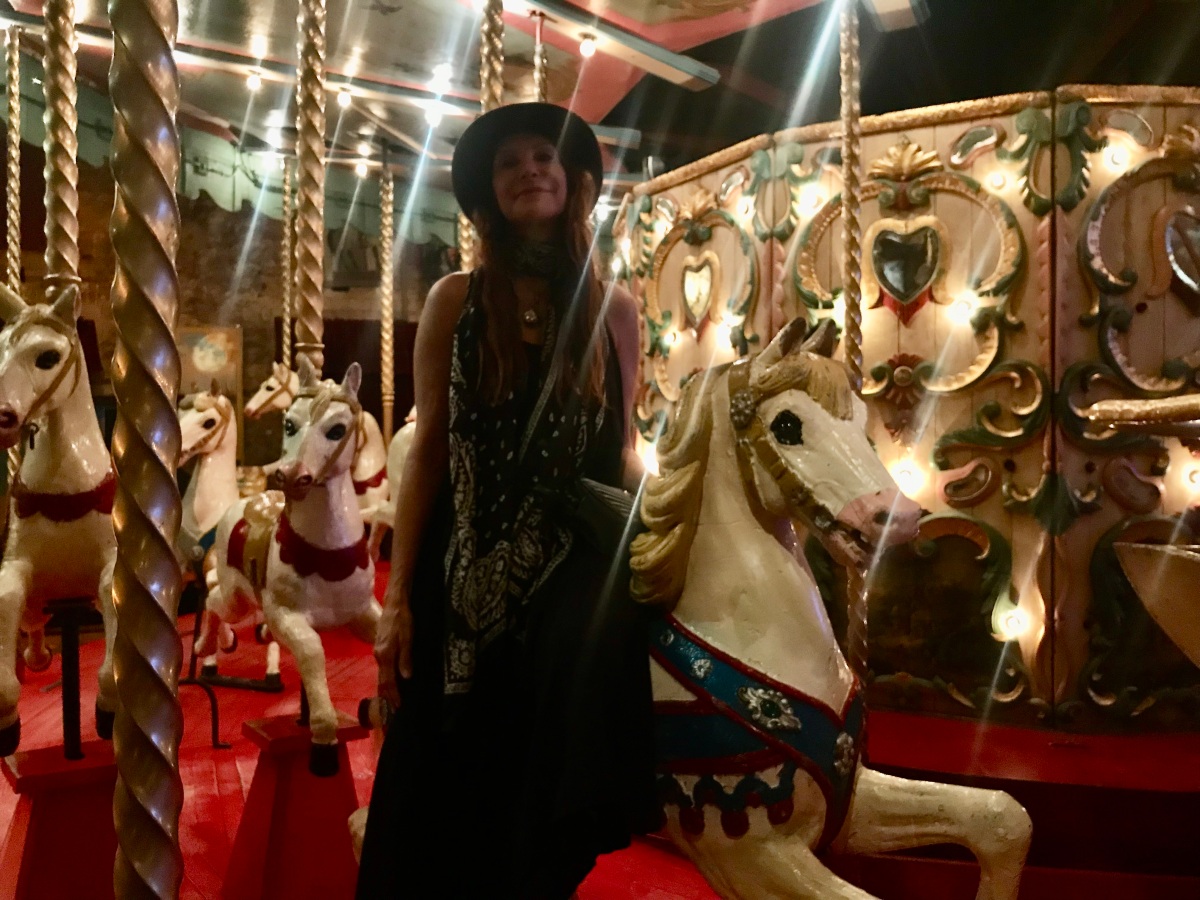 A little bell rings and our guide, Lybert, says, “Let’s go!” The carousel begins to turn, counterclockwise, the horses that are free to do so start to rise and fall.

There’s music, evoking a fair. And Piaf’s voice: “Mon Manège à Moi” — “My carousel is you.”

We don’t know the words or their meaning, or how perfect they are. But we know it’s Piaf, of course. We would have known even if Lybert had not told us already.

Lybert sings along for one spin, then lets Piaf take over.

We spin and laugh. We try to hold hands but it’s hard as we alternate the ups and downs. Upsan Downs. Sounds like a horse track.

There is, in fact, a horse race here, a mechanical game about 20 feet wide, at which a dozen or so players roll balls into holes that move their respective steeds forward a step or two or three until one crosses the finish line. There’s another here as well, but with French waiters carrying trays instead of horses. We play them both, with much excitement.

This is Le Musée des Arts Forains, its Belle Époque and Venetian delights housed in the old brick complex of warehouses that was originally a wine distribution center, Les Pavilions des Bercy, just up from the Seine’s Rive Droit. If you’ve seen Woody Allen’s “Midnight in Paris,” you’ve seen it. The party scene with Gil/Owen Wilson doing the Charleston? That’s the carousel. And then he and Adriana/Marion Cotillard go see another carousel, one with bicycles pedaled into a centrifugal frenzy?

The group with which we are touring the museum would be on that one soon, the young son of a couple from China crying and struggling to free himself from his mother’s grip as we turn, clockwise now — those on “bikes” pedalling furiously while those of us on “carts” hang on for dear life and desperately seeking fixed points on which to focus. That’s what spinning skaters do, right? When it stops we’re equally dizzied and relieved that somehow, miraculously, the kid didn’t fly off.

A “re-creation” of a Venetian ball with animatronic figures perched in balconies around the room.

But now we’re riding the horses around and around.

My head is swimming. A lot swirling inside it.

I pat my right front pants pocket to make sure the two little slips of paper have not fallen out. I’d moved them over from my more crowded left pocket a few minutes ago. I’d moved them to that pocket from my passport in a pouch around my neck, where I’d squirreled them earlier in the day. I want them safe, but handy.

“Make some noise!” Lybert says, as the carousel slows.

He says that a lot, whether singling out one of us on the tour who has answered a question he’s posed correctly, or looking for enthusiasm from us regarding one of the attractions. He seemed a bit much at first, but by now we’ve come to like him a lot. He has dramatic flair. Susan asks him if he’s performed opera, he says yes, that’s what he does! But there’s no way he hasn’t played the MC in a production or two of “Cabaret.” Absolutely no way.

He takes us to the next room.

Another calliope, fed with a perforated paper roll a la a player piano, causing horns to blow, tines to tinkle, drums to beat.

A slow-turning carousel from Venice, simulating a ride on the canals — we sit in a swan. We laugh. We kiss.

We come to the end of the tour, Lybert wraps it up as he began it, in full cheerlead mode. Our ad hoc group disperses toward the gate: The mother and her two young daughters from Santa Monica, right around the corner from us! The couple from England. The young woman from Philadelphia. The Chinese family, having averted disaster.

I’d noted the display of three carousel horses mounted in a wooden platform along the entryway when we were first let in. It would do.

She looks puzzled, but sits.

Lybert, though stands holding the gate, 20 feet away.

“Is it alright if we just sit here a little?” I ask,

I can’t explain to him my reason for wanting to linger, and reluctantly motion to Susan that we have to leave, uncertain of what to do now.

We walk out to the street, a semi-industrial neighborhood, not a lot of traffic. The sun is brighter for us having been inside. I look around and notice just as we turn right that the outer wall of the building has a set of false arches recessed into the brick. At the first one I motion to the ledge at the bottom of the arch and say, again, “Sit with me for a minute.”

It’s a little dirty. Three Corona bottles are strewn at its base in various states of repose.

She sits, uncertain, on the right side of the ledge. I sit next to her, and turn to her, taking the slips of paper from my pocket.

“I want to read you something,” I say.

“Okay,” she replies, drawing the word out with quizzical doubt.

I look at the top one of the two slips, on which I’d scribbled the words, copied that morning from notes on my computer. I’d planned this days ago, back in Santa Monica, and meant to print it out, but forgot. So at our apartment in the 6th a few hours before, unable to find “real” paper, I wrote them out on these receipts, deliberately defying my historically poor penmanship to make them legible.

“First in French,” I say, launching into the best pronunciation I can dredge up from my grade-school classes of words rendered en Français by Google Translate. Maybe not as poetic as it could be, but it sufficed.

I shuffle the slips and bring the other to the top.

Today, everything you want

I swear it will all come true

Today, I realize how much

I’m in love with you

With you standing here

I could tell the world

What it means to love

To go on from here

I can’t use words

Without pausing at the last word, I add:

Susan Elizabeth Hayden, will you marry me?

Her eyes widen. First shock, then a smile.

Then,  quickly, “WAIT! Did you just ask me to marry you?”

She looks at me blankly.

It’s one of “our” songs, a key one in our early courtship, if you can call it that, a crucial discovery of something we shared.

“Really?” she says, startled. “You read it like it was Walt Whitman or something! Read it again!”

I read it again. As I did the first time. Deliberately, word by word, trying to hold my composure.

Her eyes water luminously as I get to the end of the English part, those last lines. But before I can re-pose the question, she says, firmly:

I do as she requests.

Susan Elizabeth Hayden, will you marry me?

“I can’t think of anything I’d rather do,” she says.

A burst of laughter radiates from her, with beams of light, so it seems. And her shoulders give a shuddering bounce, as they sometimes do following a sweet kiss.

I rise from my knee and give her a sweet kiss.

She laughs and shudders again. We laugh together.

“Let’s go to the Marais and get falafel!”

She wants falafel, she gets falafel. I want it too. As one does at such a time.

Taxi drops us off at the start of the cobbled street along which contempo boutiques crowd in against Judaica in various forms, many winding down the day as the sunset bringing the Sabbath is coming in a few hours.

Among the many falafel dealers, we choose L’as du Falafel, with its hard-to-miss green-and-yellow front and celeb endorsements (“Recommended by Lenny Kravitz!”). There’s a line 10 deep at the takeaway window and a steady stream of people going in and out from the inside seated area. We feel badly for the other place with basically the same menu right across the walk, which has nearly no business at all, but we go in anyway. 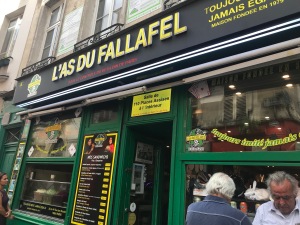 Good choice. Djokovic beating Bautista at Wimbledon is on the TV on the wall. A delicious falafel-in-pita each later, 20 minutes or so, we head back out to stroll.

After just a few steps, we’re approached by a rather chipper young Hassid in full black-suit-black-hat-white-shirt dress, though only a relatively light, short beard.

Slight hesitation before I answer, “Yes.”

“I’m from Australia.” There is a trace of an accent.

He holds his hand out.

“Do you know the Tefillin?”

“Yes,” I say, warily eyeing the black cube and leather straps he proffers.

“Would you like to put on these bad boys?”

Only slightly thrown by “bad boys,” I shake my head no, stopping just short of saying, “Clearly you have mistaken me for some other Jew.”

We keep walking. So does he alongside us, pleasant but persistent.

“May I give you some candles for the Sabbath?”

I’m waiting for the ask for cash, which he anticipates.

“They’re free,” he says, sincerely seeming not to expect or even want a donation for his chabad.

And with that he hands me two candles, those little tea lights in the short tin casings, just a half an inch deep. The kind that are commonly arrayed on votive stands in Catholic churches. Or inside jackolanterns.

“The man prays,” he says, expansively. “And the woman lights the candles and spreads the light.”

I turn to her, the light-spreader. And smile.

He holds out his hand, offering nothing but a congenial shake and smile, which I take and return.

“Shabbat shalom!” we wish each other. 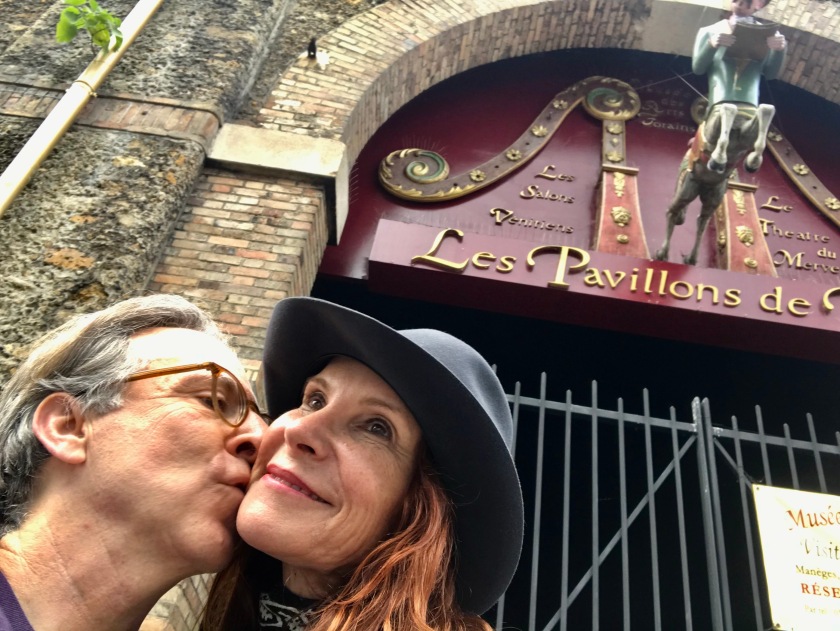