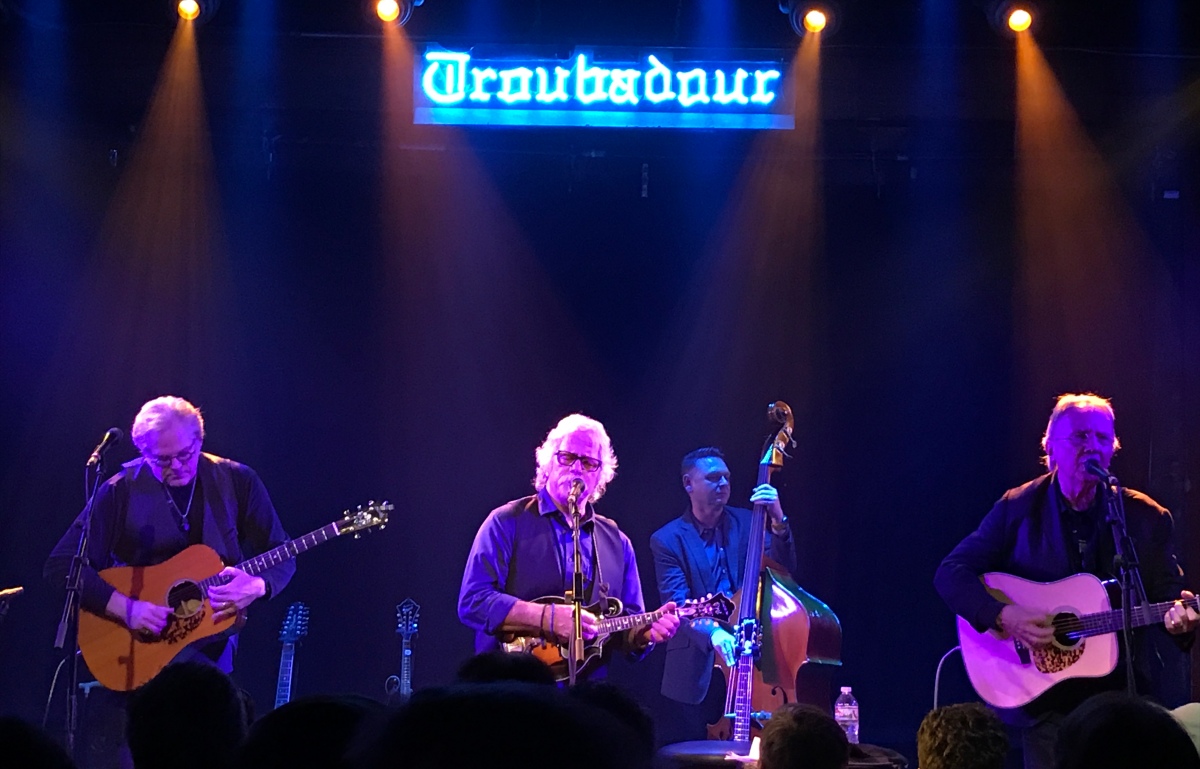 To everything, there is a season…

Chris Hillman has marked many seasons at the Troubadour, where he sang those words Monday night in a show as moving and personal as they get.

It was in this very room where he and the Byrds, who had a folk-rock hit of “Turn, Turn, Turn,” Pete Seeger’s setting of the passage from Ecclesiastes, made their first concert performance a full 53 years ago. Flanked by guitarists Herb Pedersen and John Jorgenson on this hot autumn night, he anchored harmonies on this and several other Byrds songs, every bit as vibrant as the group was known for in its heyday. Maybe more so — “It wasn’t very good,” he said this night of that first night back then.

It was here that he and Pedersen first met and formed a lifetime partnership a year before the Byrds formed, when they were each teens playing in different L.A. country-bluegrass bands — the Golden State Boys and the Smokey Grass Boys, respectively. They reached back to that with Buck Owens’ “Together Again” and the gospel-bluegrass standard “Rank Stranger,” heartfelt, joyous, earthy — again with exquisite harmonies running back through the Everly Brothers to the very roots of American music.

It was here, Hillman said on stage, that he first met his wife, Connie, on a night in 1968 when they’d each come to see Joni Mitchell. He sang, “Restless,” from his wonderful, new “Bidin’ My Time” album, for her.

A year after that, he was back here alongside Gram Parsons with the Flying Burrito Brothers, the groundbreaking and still influential country-rock band they co-founded. He recalled singing the Hollywood ode, “Sin City,” back then, and sang it again now.

And with Pedersen and Jorgenson, he was able to revisit his ‘80s time with them in the country-centric Desert Rose Band. The songs they did from that catalog still sound as fresh and distinctive as they did then, upright bassist Mark Fain rounding out the group and this night with a solid foundation.

But it was a season that didn’t come which was at the heart of this special night. The show was originally supposed to happen a week earlier. Tom Petty, who co-produced the new album with Pedersen, was supposed to be joining in on the performance. There were hopes that David Crosby and Roger McGuinn, the other surviving Byrds founders, would appear as well. Petty died, shockingly, three weeks ago. The show was postponed, in part out of respect for Petty’s family, which was holding his funeral on that day. Crosby and McGuinn couldn’t make the rescheduled date.

A time to mourn….

“This is for Tom,” Hillman said at the top of the show. He said it again after they performed Petty’s loving “Wildflowers,” which closes the new album perfectly. And again at the end of the night, after he, Pedersen and Jorgenson did a spontaneous second encore, at audience demand, of HIllman’s tear-bringing ‘90s song “Heaven’s Lullaby.” Petty, who embraced the Byrds as a core influence and inspiration throughout his career, was here through them.

Others who have gone were here too. Original Byrd Gene Clark, who died in 1991, just 46, was represented by two songs, “She Don’t Care About Time” and “Set You Free This Time,” the latter with Jorgenson taking the lead vocals. “[He was] the greatest songwriter I ever worked with,” said Hillman introducing “She Don’t Care,” which is featured on the new album. That’s quite the statement, given who he’s worked with, the late Parsons not the least of them, also represented strongly this night. Pedersen also drew on his time with the innovative ‘60s bluegrass-country band the Dillards, including a sweet version of the Jesse Lee Kincaid song “She Sang Hymns Out of Tune.”

But it was those who were here here, here now, who brought it all to life, who made this such a loving night of music. Jorgenson, playing 6-string and 12-string acoustic guitars, mandolin and, on one song, keyboard, is a dazzling musician — not showy, not flashy, just damn good. Hillman too, switching between guitar and mandolin, has an understated mastery that can sneak up on you. The Byrds’ psychedelic classic “Eight Miles High” was a particular showcase, as they traded licks with Hillman on mandolin and Jorgenson on 12-string, McGuinn’s original channeling of John Coltrane now re-directed through Bill Monroe.

And near the end of the show came the giddy “Here She Comes Again,” a Hillman-McGuinn song from the late ‘70s, revived for “Bidin’ My Time” with McGuinn, Petty and several of his Heartbreakers on board. Even in the acoustic, stripped-down version Monday, it was pure pop delight, a skip to its step and a smile on each face. And that was a great tribute to all involved, here and gone, too.

A time to laugh… A time to dance … A time of love.